Before connecting a new installation to the mains voltage, the insulation resistance measurement must be carried out to check the correct condition of the same. Like electric machines, cables are subject to overloads, short circuits and ground faults. To know if after these incidents the cable is in optimal service conditions, two tests can be performed; Measurement of insulation resistance and measurement of cable continuity.

Continuity measurement in cables, this test is very simple, you take the multimeter and proceed to measure the continuity of the cables as shown in the figure, the cable represents a three-phase cable with metal strap as a protective screen, it is normally connected to ground although when we do the checks there will be what to disconnect It can be done with the ohmmeter, continuity tester or the Megger, although the latter is the most advisable since the other two cables of a certain length give errors in the measurement.

At one end of the cable the three cables are bridged, at the other end with the megger are made pairs of wires, if they are fine, in all combinations the megger will mark 0 Ω, and if any cable were cut the megger would mark ∞.

In this case, it is measured with the megger making pairs of cables, if the cables are in perfect condition all the combinations should mark ∞ if any pair marked value X ohms or 0 Ω is that that pair of cables it is derived between them.

Test between conductors and earth 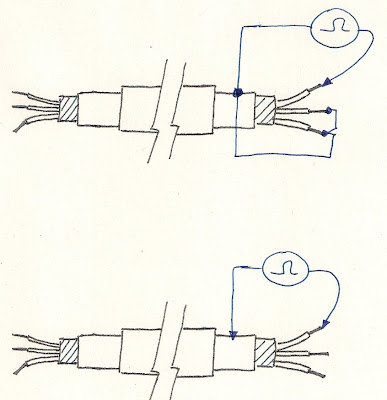 The armor is normally connected to ground, to make the measurements must be disconnected, it can be done in two ways:

– At one end, the positive of the merger is connected to the armor and all drivers except one that the negative will be connected, if there is a defect it will mark a low resistance, the test is repeated with the other conductors if they are correctly marked a high resistance.

– The second way is to do it between the armor and conductor, if there is little resistance is that the cable is grounded, if the megger a high insulation resistance well marked it.

Check of the succession of phases

Usually the cables have different colors, or if they are of the same intensity they have a number to be able to differentiate them, if not, one way to find out is: join at one end the metallic armor and any other conductor, in another end with the megger connect the positive in the armor and the negative in the conductors one by one, the cable that corresponds to the same cable the megger will mark 0 Ω, those that do not correspond to the megger will mark ∞.

Measurement of the insulation resistance, as we already know the device used to perform insulation measurements is the megger or megger. Formerly it was used as a practical formula; for each kilovolt of mains voltage corresponds 1MΩ of insulation resistance, that is, if the mains voltage was 380 v for the insulation resistance to be correct it should give 0.38 MΩ. This formula is usually applied for underground cables in lines of 3rd category (medium voltage) or a manufacturer proposes to use it in their machines or cables, but for those lines that are covered in the Low Voltage Electrotechnical Regulations, the ITC must be followed. BT-19, I quote: * MBTS

= Very low safety voltage.
* MBTP = Very low protection voltage, both voltages in dry rooms are considered up to 50 v in alternating current and 75 volts in dc, in wet rooms corresponds to 24 volts in ac and 50 in dc, summing up are voltages less than or equal to 50 V For any questions, see ITC-BT-36.

This insulation is understood for an installation in which the length of the set of pipes and whatever the number of conductors that compose them does not exceed 100 meters. When this length exceeds the value above and the installation can be divided into parts of approximately 100 meters in length, either by sectioning, disconnection, removal of fuses or opening of switches, each of the parts in which the installation has been split must present the insulation resistance that corresponds.

When it is not possible to carry out the aforementioned fractionation, it is accepted that the value of the insulation resistance of the entire installation is, in relation to the minimum corresponding to it, inversely proportional to the total length, in hectometers, of the pipes.

The insulation shall be measured in relation to the earth and between conductors, by means of a DC generator capable of supplying the test voltages specified in the table above with a current of 1 mA for a load equal to the minimum insulation resistance specified for each voltage .

During the measurement, the conductors, including the neutral conductor or compensator, will be isolated from the ground, as well as from the power supply to which they are usually attached. If the masses of the receiving devices are connected to the neutral conductor, these connections will be suppressed during the measurement, and will be restored once this has been completed.

When the installation has circuits with electronic devices, in these circuits the phase conductors and the neutral will be joined together during the measurements.

The measurement of insulation in relation to earth, will be made by joining the positive pole of the generator and leaving, in principle, all receivers connected and their controls in “stop” position, ensuring that there is no lack of electrical continuity in the part of the installation that is verified; the interrupting devices will be placed in the “closed” position and the circuit breakers installed as in normal service. All the conductors will be connected to each other including the neutral conductor or compensator, at the origin of the installation that is verified and at this point, the negative pole of the generator will be connected.

When the insulation resistance obtained is lower than the minimum value that corresponds to it, it will be accepted that the installation is, however, correct, if the following conditions are met:

MEASURE OF THE RESISTANCE OF INSULATION IN RESPECT OF EARTH.

When carrying out the measurement, proceed as follows:

a) The phase conductors ( L1, L2, L3 ) including the neutral ( N ), will be isolated from their power source to which they are usually connected.

c) The positive of the megohmmeter will be placed on the protective conductor ( CP / PE ) and therefore on the ground, the negative will be connected to any phase, neutral or bridge conductor with which we connect all the conductors.

d) The phase and neutral conductors will be bypassed at the beginning of the installation, although it goes without saying, the network must be without voltage for obvious reasons.

e) All the receivers will remain, in principle, connected and their controls in the stop position, if there were fuses, disconnectors, switches, etc., interspersed between the load and the power supply line that we are going to get these will be left connected.

f) Once the measurement has been carried out, check the values with the table I have placed above, taken from the Low Voltage Electrotechnical Regulations. RESISTANCE OF INSULATION BETWEEN ACTIVE DRIVERS (L1, L2, L3 and N).

a) The phase conductors ( L1, L2 , L3 ) including the neutral ( N ), will be isolated from their power source to which they are usually connected.

b) if there were fuses, disconnectors, switches, etc., interspersed between the load and the power supply line that we are going to get, these will be left connected.

c) The loads must be disconnected, it is important to do so because at the time of megar could spoil receivers or charges especially those that have electronic circuits.

d) The measurement will be made successively between drivers taken two to two.

e) Once the measurement has been carried out, check the values with the table I have placed above, taken from the Low Voltage Electrotechnical Regulations. However, when measuring the insulation resistance in conductors with the megger or megger, it is necessary to take into account the surface leaks that may exist between the positive and negative of the megger that may distort the measurement. The megometers have three conductors: the positive, the negative and the guard wire (or guard), usually signaling with the letter G.

Which has the same potential as the negative. As you can see in the following drawing, if we measure the insulation resistance between the shielding of the conductor and a conductor, it could be the case of creating a surface leakage current that would distort the measurement. What causes this surface leakage current? ? As dirt on the driver, humidity, proximity of positive and negative, etc.

To avoid this, the guard conductor ( G ) is connected as shown in drawing 2, in this way the measurement will be precise, avoiding surface leakage currents.

The third drawing shows another arrangement to avoid surface leakage currents and also joining the conductor (or conductors) that are free to the driver ( G) avoid capabilities that could appear in the driver (or free drivers) that would also distort the measurement, this provision would be ideal.

I am a chemistry researcher and research various household products to make life easier and enjoyable for people around the world.